We knew one of the biggest variables in this trip was going to be the weather. Well, Mother Nature isn’t making it too easy for us this year.

The Good: The Mississippi River headwaters area trails supervisor called us back about last summer’s windstorm that toppled hundreds of trees, letting us know a crew went through last year and cleaned up the most significant damage. Although there may be a downed tree here or there, forcing us to portage our canoe occasionally, he saw no reason for us to change our plans.

The Bad: Certain sections of the Mississippi River between are experiencing significant flooding (some of it record-breaking), which has forced the closure of much of the river and made headlines around the country, including these gems: Mississippi River Communities Brace for Flooding, Floods to Sideline Mississippi Barges for at Least Another Week and Mississipi River Reopens After Barges Hit Bridge, a story about the river re-opening after several of the 30 barges that broke free from their towline because of the flooding hit the railroad bridge near Vicksburg. To think that just a few months ago the big concern was a drought that also threatened closure of the river. If there’s a silver lining, it’s that we won’t reach these sections for another few months, so hopefully flooding will not be a concern by then. But:

The Ugly: Snow storms continue to wallop the upper Midwest, increasing the risk of further flooding. As of April 19, 14 inches of snow have fallen in the Twin Cities, and that was before another several inches fell yesterday. Even before this week’s storm, this April is snowier than the past 10 Aprils combined. Uff da. 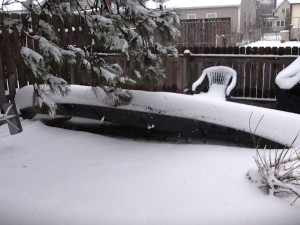 As we’ve enjoyed nearly 80-degree weather in New York, our canoe has been weathering a spring snowstorm in the backyard of Dave’s parents’ house in Minnesota. Word is that up in the Mississippi River headwaters, the ice on Lake Itasca is 30 inches thick and Itasca State Park is still buried under about 15 inches of snow. Ice out on the river is looking to be a bit late this year, but at this point launching our canoe over Memorial Weekend still seems quite feasible.

A park naturalist also gave us some unexpected bad news recently. A major windstorm blew through the stretch of river from Lake Itasca to Lake Bemidji last July, taking down hundreds of trees and making passage difficult-to-impossible. The naturalist was unsure if the damage will be cleaned up by May. We’re checking in with the area trails supervisor and crossing our fingers for good news.

After nearly a decade of having the idea to float/raft/canoe down the Mississippi River, Linnea and I will launch our 17′ Alumacraft canoe in Lake Itasca next month and, if all goes well, paddle to New Orleans. We’ll make a few stops along the way — some obvious, like the Twin Cities, where we’re both from — but we’ll also visit interesting-sounding, less-traveled towns like Nauvoo, Il. (which brands itself Williamsburg of the Midwest, as in Colonial Williamsburg, not the hipster capital in Brooklyn) and Helena, Ark. (known for its Delta blues). We’ll meet up with some friends along the way, and hope to make some new ones in the process.

We plan on blogging along the Mississippi River from our smartphones the best we can, assuming our solar panel proves sufficient and we get adequate reception. You can also follow our journey on Facebook and Twitter. See you on the water.

An 83 day canoe trip on the Mississippi River from Lake Itasca in Minnesota to the Gulf.